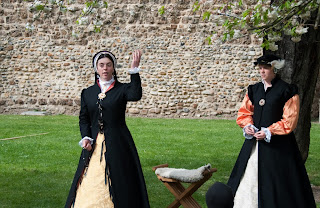 “When the battle-line seemed fully drawn up, sacred Mary rode out from Framlingham castle about four o’clock (the day was a Thursday), to muster and inspect this most splendid and loyal army. While her majesty was approaching, the white horse which she was riding became rather more frisky at the unaccustomed sight of such an army drawn up in formation than her womanly hesitancy was prepared to risk, so she ordered her foot-soldiers, active and dutiful men, to lift up their hands to help their sovereign until she got ready to get down; obedient to their gentle mistress’s request, they brought the queen down to the ground. Once she had got down from her horse, the good princess first gave warning in an order that no harquebusier should fire his gun, nor any archer release his arrows until her majesty had inspected her army. When this order was given, such was the respect that everyone felt for their sovereign that no harquebusier nor archer fired after her command; but the soldiers bowed low to the ground and awaited their beloved mistress’s arrival with as great an obeisance as they could manage. When she came along, they offered her such reverence that I had serious doubts whether they could have given greater adoration to God if he had come down from Heaven.”

“But be you assured, you shall never escape death; for if she [Mary] would save you those that now shall rule will kill you.”

In her coronation procession, Mary was likened to courageous Judith who had brought about the demise of her peoples enemy, Holofernes. Fortunately Mary did not have to resort to seducing the duke of Northumberland in order to destroy him. But she procured the same result – the severed head of her opponent.


The duke had long been unpopular in certain parts of the kingdom but at least he had allies who had stood alongside him in the early days of Jane’s reign. Now, like his daughter-in-law, he had been abandoned by almost everyone. Aside from his wife and sons, few would mourn his death. Fellow members of the Privy Council were attempting to distance themselves from him and to indicate that he was responsible for Mary being denied the throne. They had decided the previous day to proclaim Mary queen in London and shortly after the announcement the earl of Arundel and Lord Paget rode to Framlingham to deliver the news to their new monarch. They would declare themselves her ‘most humble, faithful and obedient subjects’ and would beg ‘your majesty to pardon and remit our former infirmities’.


However the men did not arrive till the evening and before then Mary believed she would need to take the capital by force. Her soldiers were called for an inspection. Evidently she had been able to gather an impressive display of arms. ‘The infantry made ready their pikes, the cavalry brandished lances, the archer bent his bow, and girded on his quiver, the harquebusier filled his weapon with powder’, and all men stood in place not moving ‘a finger’s breadth from position’. At four o’clock she rode out though a restless horse lead her to inspect her troops on foot. She spoke to the men for some time, treating them ‘with exceptional kindness’. But perhaps most importantly she was recorded as adopting a relaxed approach, investing in her men a sense of confidence they would prove victorious. As soon as she got back on her horse to ride away, a large section of the cavalry ‘suddenly streamed forth and beat and trod the ground with such a thunderous noise and spread so widely through the field that it seemed like one enemy in pursuit of another’.


The day would only prove to get better. Arriving back in the castle she was told that the Privy Council had declared her queen and London was the scene of much rejoicing. This was confirmed in the same evening when Arundel and Paget arrived and begged for her clemency. Then came others equally remorseful. Amongst them were two men from the duke’s army, Sir John Clere and Lord Clinton. Richard Rich, the man infamous for his involvement in the downfall of Sir Thomas More and his ability to change allegiance without much concern, also arrived later that evening.


The duke was also informed on this date of the turn of events. Along with his son, John Dudley, Sir John Gates and the earl of Huntington he went to the marketplace in Cambridge, threw his cap in the air, scattered coins in celebration, and called for Queen Mary. Having done his duty he told Edwin Sandys, one of the few men who hadn’t deserted him, that he hoped Mary would prove merciful and spare him as she would the other councillors. When the earl of Arundel came to arrest him only a few days later, he posed the same question and asked the earl to intervene for him. “My Lord, you should have sought for mercy sooner”, was the only response he was met with. 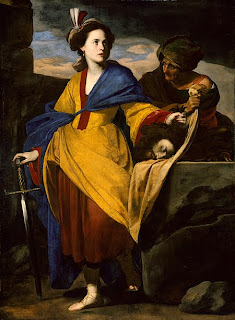 (Top image - Reenactment of Mary’s inspection of her troops at Framlingham. Photo taken by Malcolm R Bell and posted on his Flickr account)

(Bottom image – Judith with the Head of Holofernes by Massimo Stanzione, c.1630-35. The Metropolitan Museum of Art, NY)
Posted by little_miss_sunnydale at 08:31