Possible portrait of a young Mary?

In July I mentioned a portrait in the Metropolitan Museum of Art, NY, that is currently undergoing research. It was once alleged to depict a young Mary, though this identification went out of favour some time ago for numerous reasons (amongst them the difficulty of explaining how a portrait of Mary could have been commissioned during the period of her disgrace).

We are fortunate to possess several images of Mary prior to her accession, including a painting by one Master John, now in the National Portrait Gallery. This painting is particularly valuable as it appears to be the first portrait commissioned by Mary herself, probably to commemorate her re-inclusion in the succession (Act of Succession of 1543). The NPG also holds a miniature of Mary by Lucas Horenbout (c.1521-5), which may be the earliest surviving English portrait miniature.

Whilst rummaging through numerous files on my computer, I came across an image of one Holbein miniature purported to be Mary. I thought this would be of interest to those intrigued by the story of The Met portrait. It is a roundel depicting a young woman in profile. It is similar in style to a portrait of Prince Edward (later Edward VI), which is also held in The Met. 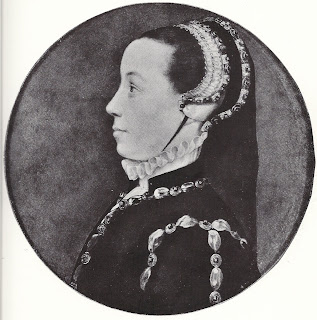 Paul Ganz in The Paintings of Hans Holbein: First Complete Edition (London: The Phaidon Press Ltd, 1950) provides this brief discussion of the portrait:

'Like the roundel of Prince Edward, the portrait comes from an unknown collection; it was discovered in 1937 completely overpainted and was restored at the same time, whereby the damage to the collar was revealed and repaired. The identification of the sitter with Princess Mary is based not only on the striking similarity between her profile and that of her brother Edward but also on a comparison with various other portraits. An early one in three-quarters view must have been painted by Holbein during a former reconciliation in 1536. It is now lost and known only from an etching by Wenzel Hollar with the inscription: Princeps Maria Henrici VIII Regis Angliae filia. H. Holbein pinxit, W. Hollar fecit. Ex Collectione Arundeliana 1647. A badly damaged portrait study at Windsor Castle with the inscription ‘Lady Mary after Queen’ which, owing to its present condition, I did not regard as an original appears to have been the preliminary drawing for Hollar’s engraved portrait with the sides reversed. Recently it has been acknowledged as authentic by Parker (W.DR. 41) and by H.A. Schmid (Hans Holbein d. J. 113).’ (p. 257)

Evidently this was written over six decades ago, and some of the findings no longer stand. The ‘Windsor’ sketch, concluded by Ganz to be a copy, is currently believed to be an original. The portrait of Edward is now believed to be from the workshop of Holbein, and not by the artist himself. The portrait of 'Mary', may also be by a follower.

The roundel is also discussed by Roy Strong. In Holbein: the Complete Paintings (London: Granada, 1980), Strong includes the portrait and states ‘Called the Princess Mary; Oil and tempera on wood/diam. 37/c.1543. London, Private Collection. Attributed work’ (p. 90). An image of the portrait can also be found in the National Portrait Gallery’s Heinz Archive in the sitter's box for Mary. No further information is provided, aside from the brief mention that it was once exhibited at the Walker Art Gallery (Liverpool).


So, do you think the portrait, possibly by a follower of Holbein, is of Mary and that there is ‘striking similarity’ between the sitter and Prince Edward? Further research would be great, but like many other portraits in private collections, we are unlikely to find out more. Aside from the question of the identity of the sitter, the portrait provides an interesting view of contemporary dress; the detail on the hood is excellent.

Siblings? Both portraits date to c.1543. The portrait of Edward may have been completed for the prince's sixth birthday (12 Oct 1543) 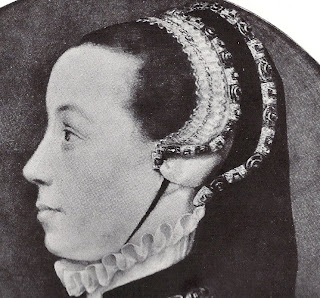