I have posted this article with footnotes here: http://www.scribd.com/doc/31223998/Queen-Mary-s-Belly-Phantom-Pregnancy 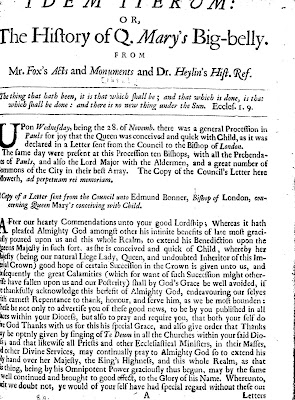 On 24th November 1554 Queen Mary I sent a private message to the papal legate, and soon to be archbishop of Canterbury, Reginald Pole, who had that day arrived at Whitehall. He was told by the messenger that the Queen had felt the child in her womb quicken. Auspiciously she had sensed the moments upon his initial words to her at their greeting: “Hail, thou art highly favoured, the Lord is with thee: blessed are thou among women”. This was excellent news; England already had a Catholic monarch, now they were expecting a Catholic heir. Surely this was a sign of God’s blessing; the Queen’s enemies must now understand the error of their ways? As one prayer stated, “Hear us, O Lord, and grant us our Petition: Let not the Enemies of thy Faith, and of thy Church, say, Where is their God?”

Yet no child came. Nine months later her stomach deflated, her breasts stopped producing milk and the foetal moments disappeared. It was deception, an embarrassing and politically damaging sham. It was now her opponents time to rejoice. Where, they retorted, was God’s favour for you now?


Historians frequently state that Mary suffered from Pseudoycesis, that is phantom pregnancy, a biological and psychological condition whereby a woman exhibits various symptoms of pregnancy yet is carrying no child. Mary suffered from this on two occasions and ultimately died childless. Why she suffered from this remains a mystery, as indeed the condition is regarded with uncertainty by medical experts today. In her biography on Mary, Judith Richards provides detail on modern discussion on Pseudoycesis to better our understanding of the condition Mary probably suffered from. This is undoubtedly interesting, but what of contemporary attitudes to false pregnancy? How did Mary’s contemporaries understand this condition; how common was it back then?


It is important to separate two complaints that are often discussed alongside each other in early modern medical handbooks. ‘False conception’ and ‘false/imaginary pregnancy’ are often included together but they were distinct in nature. False conception is where a woman was regarded to have conceived, though she carried a ‘mole’ – a ‘faux germe’ – or some other growth that was not regarded as child and was seen as harmful to her health. ‘Mole pregnancies’ as they could also be called, were the subject of much more literature than imaginary pregnancies whereby the woman was seen to carry nothing within her womb. There was, for instance, a complete study on mole pregnancies, Lamzweerde’s Historia Naturalis Molarum Uteri (1688), though no study throughout the early modern period on phantom pregnancies.

Yet it was discussed in medical handbooks. The leading medical text, Aristoteles Master-piece (1684) referred to women who ‘may have signs or symptoms, coherent with the true, as the depravity of Appetite, puking, swelling, suppression of the Courses, swelling of the Breasts and Belly, so that many are at a plunge to distinguish them’. The physician William Harvey recorded cases of phantom pregnancy he had encountered. One woman had insisted she was pregnant, only for ‘all her hopes to be vanished into flatulency and fatness’.


What was seen to cause phantom pregnancy? Unsurprisingly there was no consensus though some explanations were endorsed more prevalently than others. The symptoms experienced, namely the expanding stomach and the perceived moments of the supposed baby, were often determined to be the product of a build up of matter. One popular notion was that the woman was suffering from excessive wind. This can be seen in the quote from Harvey just provided. Hippocrates once remarked that ‘when the womb is fleshed by wind in the belly, women think they have conceived’. Delusion was said to be another cause; physician Guillaume Mauqeust de la Motte referred to those women who ‘have such an aversion for old-age, that they had rather believe themselves with child, than to confess they are growing old’.


Fortunately we have a case study rather close to Mary that provides some more information. In 1536-37, Honor Plantagenet, Lady Lisle, perceived herself to be pregnant. This was her eighth pregnancy, hence no one doubted her claims, nor indeed was she sceptical. Friends sent goods for the baby and for the confinement chamber ensuring Lady Lisle would experience a pleasant childbirth. Months went by and no baby came. Finally realising her mistake she sought treatment. Her French physician told her that she was suffering from the ‘gather[ing] together many or diverse cold and slemysh humours within your body’, and therefore required purging remedies.


The belief that a woman must be carrying something – some matter that could be expelled – was a common belief. We may argue that part of the popular idea that Mary suffered from a tumour has been propagated by this notion that her stomach was disbanded by something (though we must remember that her stomach returned to its original state after each ‘pregnancy’ and during the embalming process carried out shortly after her death no mass was found in her stomach). There was even the contemporary rumour that the queen had given birth to a ‘mole’ though this notion appears to have been forwarded to discredit her and not backed by other sources. The view that there was some imbalance, some build up of undesirable substances, naturally lead to purging treatments being recommended. Diet was important. Lady Lisle was told not to eat raw food and particularly not to eat ‘cold meats, as powdered beef that is cold, or cold veal’. For surely, it was argued, this had caused those ‘diverse cold and slemysh humours’ to compile. Hot broths were instead recommended. Sugar was also important. Physician Nicholas Culpeper advised that the patient drink a concoction of ‘wine, sweeten it with Sugar’, along with ‘Broaths with the same’ to be used to purge the body of ill humours. Interestingly mixtures sweetened with sugar were also recommended to induce abortion or to strengthen the unborn child and weaken any ‘faux germe’. Interestingly an article in The Independent a few years back remarked:

Was Mary unique in experiencing a false pregnancy? It would be easy to point to the case of Lady Lisle and say no. After all, Lady Lisle’s secretary, John Husee, reminded her that ‘your ladyship is not the first woman of honour that hath overshot or mistaken your time and reckoning’. In 1541 Marguerite of Navarre believed she was pregnant, related the news to her brother, François I of France, though several months later she reported that she realised she was not and the affair was hushed up. Interestingly, Justine Siegemund, court midwife of the Electorate of Bradenburg in the seventeenth-century, had a false pregnancy. As Husee reminded Lady Lisle, God ‘spareth neither Empress, Queen, Princess ne Duchess, but His handiwork must be suffered and his mercy abiden’.


Mary lived in a society where there were no certain ways of determining pregnancy. It seems incredible to us that a woman may go through nine months thinking she was pregnant and could only be sure when the child was in her arms. But pregnancy remained mysterious. Contemporaries understood it was very possible for a woman, and indeed her midwife or if she was wealthy her male physician, to believe she was pregnant for months – even up to eleven months – before discovering she was not. Eighteenth-century Scottish physician, Alexander Hamilton remarked that false pregnancy was something that ‘imposes on the skilful physician’, the implication that even expertise does not mean this condition could easily be determined. Another physician of the same century, Gerard van Swieten, observed, ‘there is no circumstance where a physician’s reputation runs so great a risk, as when he is employed to determine concerning pregnancy’. With no means of being able to see the child within the womb and the ability to attribute symptoms of pregnancy to other ailments, there was nothing certain about pregnancy.


By understanding early modern beliefs on phantom pregnancy, we can comprehend how Mary could come to perceive herself to be pregnant twice, and on both occasions have the backing of her physicians. Yet despite contemporary understand that pregnancy was not something that could be determined with absolute precision before the arrival of the child, that did not mean Mary was immune to ridicule or condemnation. Naturally, her enemies exploited the situation. When Mary’s pregnancy was announced the authorities made use of this to promote the notion that God had shown favour for the Queen and the Catholic Church. Pole’s words to Mary are important here; like the Virgin – whom Mary is compared to repeatedly during her life – she has been blessed. The child would be the country’s saviour. With such hopes dissipated, the critics could respond effectively.


The episode proved not only useful to contemporary critics. In 1688 another Queen Mary - Mary of Modena, consort to James II – gave birth to a healthy boy. Yet despite experiencing a real and successful pregnancy, rumours quickly spread that the infant was not her child, but had been smuggled into her bedchamber via a ‘warming pan’. Like Mary Tudor, her pregnancy was doubted. Interestingly the example of Mary Tudor’s phantom pregnancy was endorsed by critics to weaken Mary of Modena’s and thus James II’s positions. In the same year a pamphlet emerged in London entitled ‘Idem Iterum: Or The History of Q. Mary’s Big-belly’. The reader was told,

‘Some said this Rumor of the Queens Conception was spread for a policy; some other affirmed, that she was deceived by a Tympany or some other like Disease, to think her self with Child, and was not; some thought she was with Child, and that it did by some chance miscarry, or else that she was bewitched; but what was the truth thereof the Lord knoweth, to whom nothing is secret. One thing of mine own hearing and seeing I cannot pass over unwitnessed.

There came to me whom I did both hear and see, one Isabel Matl, a Woman dwelling in Aldersgate-stree in Horn-Ally, not far from the House where this present Book was printed, who before witness made this Declaration unto us, That she being delivered of a Man-Child upon Whitsunday in the morning, which was the 11th. day of June, 1555. there came to her the Lord North, and another Lord to her unknown, dwelling then about Old-Fishstreet, demanding of her if she would part with her Child, and would swear that she ne'er knew nor had any such Child. Which, if she would, her Son (they said) should be well provided for, she should take no care for it, with many fair Offers if she would part with the Child.

After that came other Women also, of whom, one they said should have been the Rocker; but she in no wise would let go her Son, who at the writing hereof being alive, and called Timothy Malt, was of the age of Thirteen years and upward.’

The implication was clear. If one queen could attempt to pass off another’s child as heir, then what could stop another? In a world with no ultrasounds or DNA testing, almost anything was believable.
Posted by little_miss_sunnydale at 14:22